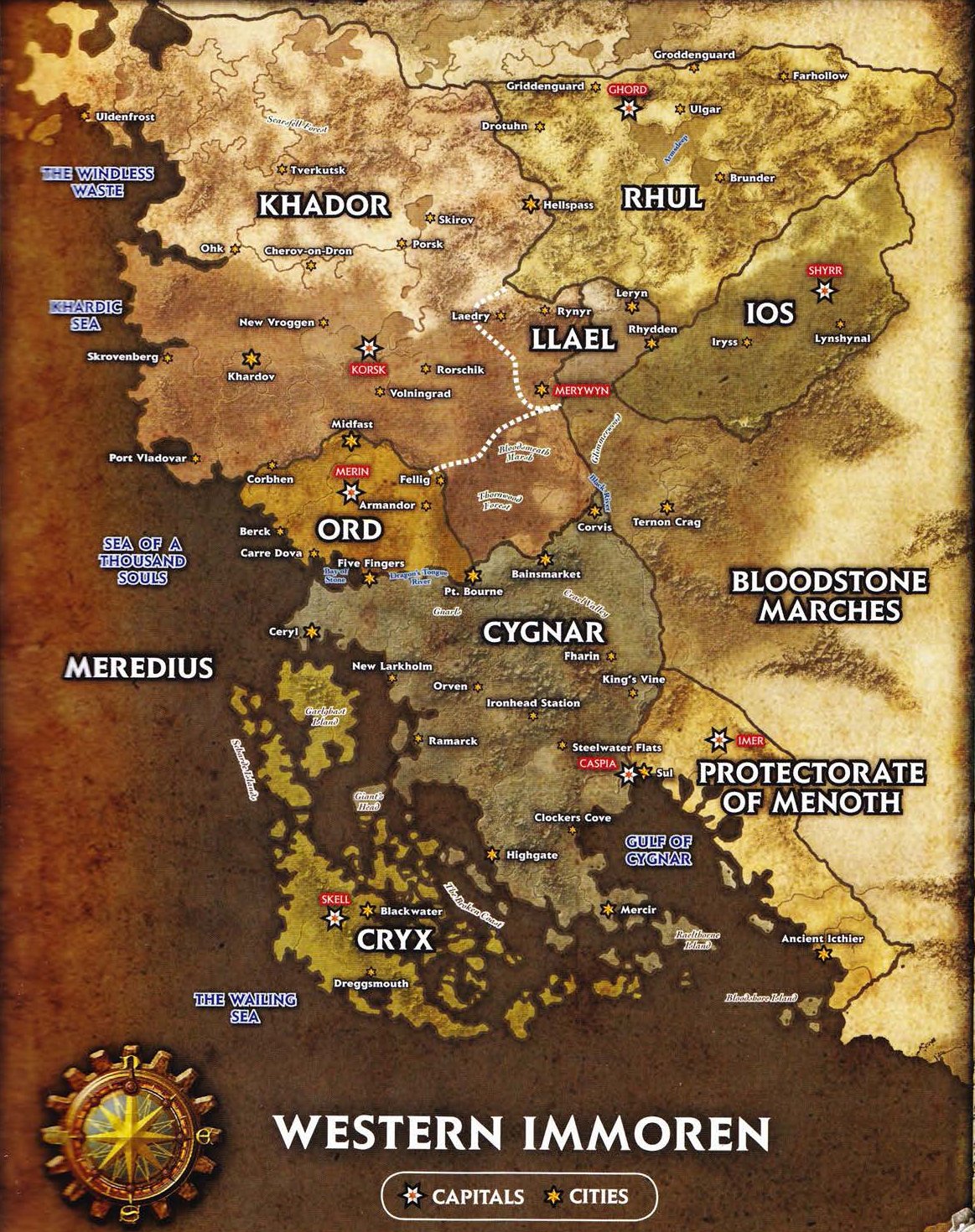 It was a hot day in Corvis, the heat was sweltering and the workers rebuilding the last of the city after the invasion by the mad old king and his new Skorne lackeys. The large crane on the harbor had broken down under the strain of the large shipments and the unrelenting heat, and banging and clanging could be heard from it interrupted by occasional swearing.
Whoever last repaired this blasted heap of junk metal really had no idea about how to make an engine run properly, Gregoriev thought. The way the gears had been put together, the unnecessary pistons, who could even think that an engine would work like that?
Shaking his head he finished the job, stayed to see that the crane did work again and went back to his workshop.
When he got there the first thing he noticed was the chain for the doorbell. He did not have a doorbell, or at least did not until now.
The second thing he noticed, when he entered the workshop, was the pungent smell, a mix between oil, chemicals and sweat.
The third was the large steam whistle mounted on the wall. What on earth was that doing there?
“It’s great, issnit?” A high-pitched, creaky voice said from a dark corner of the shop.
“Lemme show you!” A small person streaked past Gregoriev and out the door.
There was a sound of a metal-chain getting yanked and then an ear-splinning whistling filled the room, so loud that Gregoriev feared his eardrums might burst.
He saw the gobber bouncing through the door excitedly but he could not hear the door close.?The gobber began to talk but it took a while before Gregoriev could hear what he said. That did not seem to influence the gobber though, he kept talking at a rapid pace.
After a while his hearing came back, he nodded and the gobber noticed.
“Magnificent isnnit?” He took Gregoriev’s silence as an agreement and continued.
“I’m Kamkanunimakiuv, inventor extraordinaire. I’m here about some of the money the Union understandably chose to support me with.”
Ah yes,  Gregoriev remembered that a letter had been send out to the leaders of the Union that a gobber had been lend a sizable amount of gold to build a driving machine. An automotive wagon that did not require rails, rather ingenious.
“Here is the first down payment”, the gobber said clearly a bit annoyed, “I hope that you people will recognize my brilliance at some point so such inconveniences will not be necessary in the future”.
Before Gregoriev could reply it knocked hard on the door, some people still were thinking practically Gregoriev happily thought.
A large shape loomed at the open door, then edged itself into the dimly lit workshop.
Long time no see, the female trollkin cheerfully said, her voice echoing and bouncing around the room getting a metallic tone from all the different mechanical apparatuses scattered around the room.
“I see you’re doing well, far cry from when we were cleaning up the sewers, eh?”
“Yes, yes it is”. Gregoriev seemed a bit uncomfortable being reminded of this low point of his career. “Glad to see you, what brought you here other than reunion with an old companion?”
“Our old friend the captain of the guard has asked if we can help him with a job once again”.
Gregoriev hesitated for a moment, he did have a good time with Mafalda and the gang, but he finally got his business going and going well at that.
“Sorry, Mafalda, you’re a good friend – the others too – but I cannot leave my shop”.
He caught sight of Kam who seemingly was trying to disassemble the engine had in the corner of the shop.
“Would an, ehm, substitute be ok?”
Kam looked up, “I ain’ no substitute, I’m the real deal”.
Gregoriev cleared his throat, “there would be money to be made, right?”
Mafalda nodded.
“Sounds like something for you, right Kam?” Gregoriev asked while he tried to pry the gobber away from the engine.

The next morning a motley crew had gathered on one of the piers at the harbor getting ready to board a ship. The most striking of the group being the large blue trollkin, beside her stood a somewhat unkempt man clad in leathers polishing a big rifle, beside him was a rather sour-looking man in a light-blue robe with golden trimmings and running around their feet like an agitated child was the gobber.
“All accounted for?” The captain of the steamer looked over the railing at the gathered group.

The ship was steaming down the Black River going southwards, dusk had fallen and soon it was night. The ship got around a bend and the river widened into a broad expansthe e.
Suddenly two faint orbs of light shone from the depths of the water and began to close on the ship. Janisz, the rifleman, usually preferred to sleep on deck and this night was no different so he was the first to notice the lights.
He observed them closing on the ship for some minutes before he alarmed the captain and his companions, no need to make a fuzz about swamp gas.
“What do you think it is?” He asked the captain when they were gathered on deck. Ever seen anything like it in the river?
“No, never. What is it even?”
Before anyone had a chance to guess at what it could be the orbs began moving upwards and revealed that they were in fact glowing eyes set wide on a head that looked vaguely horselike. The head was placed on a long neck, far too long compared to the rotund body that looked like an unholy cross between a donkeys body and legs, the scales from an dracodile and general shape of a barrel. All over it’s body there were places where the skin and scales did not cover its body properly so one could see sickly colored flesh and bones jutting outwards almost as if the creature was about to fall apart from the inside. But despite its appearance it was alive and did not give of the aura of decay that the undead abominations the group had met so far had had.
“What in the name of the Mother is that”, Mafalda whispered to herself.
The creature let out what probably was it’s equivalent of a roar, a whistling noise that ended in a gurgling sound like something was drowning, and charged towards the ship. Given its size and look the speed was impressive, and soon it was so close to the ship that the crew could smell its stench that would have made a burning morgue seem like a flowerbed.
One of the deckhands was unfortunate to look directly into its eyes and fell to the deck petrified, all life seemingly gone from his body. That creature might look strange but it certainly was dangerous.
Janisz quickly got his rifle and began firing round after round into the creature, carefully avoiding to look directly into its face. The bullets did not seem to affect it much though, and it closed in on the ship.
A flash of lightning illuminated the ship and a burnt black mark on the flank of the creature combined with an even worse smell told them that the sorcerer had joined the fight. His smug smile could have told them the same if they had cared looking, but his confidence quickly fell when the creature got even closer to the ship and began ramming it with its head as if it was trying to get the ship to turn over.
Mafalda began singing, first a slow quiet tune but it soon rose, got faster and more aggressive and the creature began to show signs of pain and back away from the ship. She continued her song and the others bolstered by her voice continued to fend off the creature and soon it retreated back to the murky depths from whence it came.
“Anyone have any idea what that was?” Mafalda asked but no one answered, all shook their heads and remained silent.
“No, but it sure did not look tasty”, Kam muttered to himself.